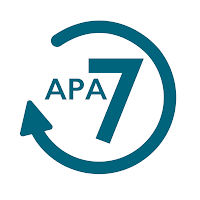 All Walden courses, competencies, and capstones now use APA’s seventh edition as the style guide for written work.

All of the Writing Center's APA resources have been updated to incorporate APA 7 guidelines.

The primary differences between APA 6 and APA 7 are outlined in our comparison tables.

Visit our APA 7 Transition FAQ for answers to common questions about the transition process and the use of APA 7.

Review our blog posts, podcasts, and other resources that address the move to APA 7.

Contact our Writing Center staff with any questions about APA 7.

The updates on this page appear in reverse chronological order, with the most recent announcements at the top of the page.

Quarter, Semester, and Tempo students have all made the switch to APA 7, and we hope it’s going smoothly for you! The Writing Center’s resources have been updated to APA 7, and Walden will continue to update Blackboard courses to conform with APA 7. Please stay in touch with us at the Writing Center if you have APA or other writing questions, and be sure to use the resources above to continue your APA learning.

We’ve created an APA 7 Transition FAQ that answers some of the most common APA 7 questions we’ve received at our webinars and within our other writing services. These FAQs include questions about the transition process and about the use and application of APA 7 in writing assignments. We’ll keep adding to it as we receive more of your questions!

Thanks to all of you who attended our APA 7 webinars over the last several weeks! We had record attendance at these sessions, and your questions helped us as we continue to develop resources for learning APA’s new guidelines. If you missed or would like to review these presentations, you can find the recordings on our student and faculty webinar archives:

The text-based instruction on the website has been updated for APA 7 changes. Videos that directly address APA guidelines have also been updated. (Videos that do not focus on APA but might include examples in APA 6 will be updated on a rolling basis.) Coming soon are updates to Knowledge Checks and Quick Answers.

The instructional pages on our website will be updated to APA 7 guidelines on May 4, 2020. Text-based instruction will be fully updated. Multimedia content will be updated on a rolling basis, starting with resources that directly address changes to APA guidelines in the new edition and then more general updates to all examples and modeling of APA in the remaining resources.

APA Webinars to Support the Transition

The Writing Center is offering opportunities for faculty and students to learn about the changes in APA 7 and engage more deeply with APA through a series of webinars.

We are also offering six APA webinars for students that will be using APA 7 throughout May. Please see our full webinar calendar for details. These sessions are a great opportunity to engage with APA rules more in more depth, particularly for students beginning with or new to APA.

As announced in February, Walden University will use the new, seventh edition of the Publication Manual of the American Psychological Association as the accepted standard for citations, references, and writing style guidelines starting in the summer terms (May 4 for semester-based programs and June 1 for quarter-based and Tempo programs).

So, what does this mean for doctoral students writing their capstones? Students actively working to complete their doctoral capstone studies or projects will have a grace period during which they have the option of continuing in APA 6 or moving to APA 7. This grace period will end on December 31, 2020.

If a student will have final URR approval of their final study or project by the end of 2020 (after Final Overall Quality Committee Rubric Analysis and before CAO Approval), they have the option of completing that study in APA 6 or APA 7, and they should consult with their chair while making this decision. Beginning January 1, 2021, all capstone writers will follow APA 7 guidelines.

The Walden form and style editors will provide support for both APA editions beginning with summer term starts through the end of the year, with templates in both editions beginning June 1. They will also provide instructions for adjusting text in an APA 6 doctoral capstone template to comply with APA 7 guidelines so students in progress can avoid needing to start with a new template.

For the remainder of 2020, when uploading capstone manuscripts at any stage in Taskstream, committee chairs, second committee members, and URRs should indicate which edition of the APA style manual a student used in the General Comments section by writing “APA 6” or “APA 7.” It is important that this information is documented in MyDR, so all those reviewing capstone manuscripts, including the form and style editors, know which edition guidelines to follow during their reviews.

The Writing Center also presented webinars to help capstone students and their committees make the adjustment from APA 6 to APA 7. View the recordings online:

As our Writing Center staff members continue to prepare for the switch to APA 7, we’re discovering a lot to love about the changes. Listen to our latest WriteCast Podcast on APA 7 (Episode 71), where Writing Instructors Claire and Kacy discuss some of the changes they were happiest to see.

Here at the Writing Center, we are busy preparing revisions to our APA resources, which will be released when the university adopts APA's seventh edition this summer. In the meantime, see the following comparison tables for a preview of what will change when we move to APA's seventh edition. 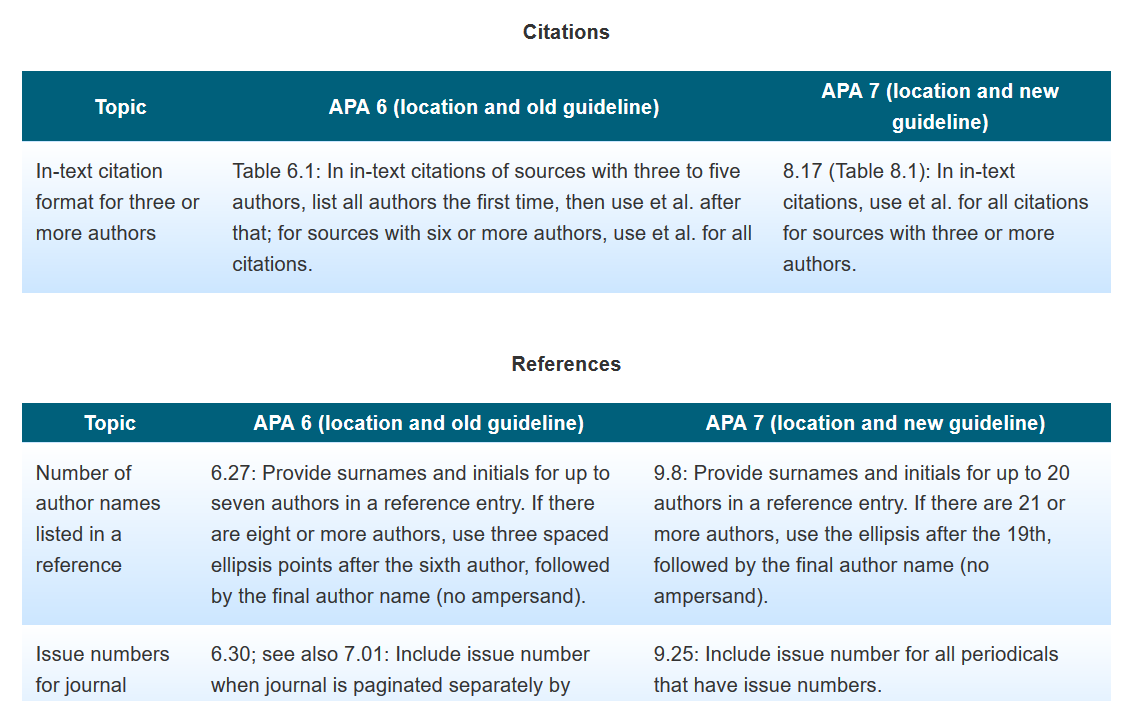 University Timeline for Moving to APA 7

Starting in the summer terms (May 4 for semester-based programs and June 1 for quarter-based and Tempo programs), Walden University will use the new, seventh edition of the Publication Manual of the American Psychological Association (APA) as the accepted standard for citations, references, and writing style guidelines.

Students with significant progress on their doctoral capstones will have a grace period after the summer term transition dates during which they have the option to remain in APA 6 or switch to APA 7. More details to come soon. Students can be assured that there will be templates and other support for APA 7 at the time of the university switch.

The Writing Center is spending a lot of time in early 2020 revising resources, preparing student and faculty training, and collaborating on classroom material revisions in anticipation of a switch from APA 6 to APA 7 later in the year. Once the university approves a timeline for this transition, we’ll communicate information about webinars, web-based resources, and other tools to help you prepare for a smooth transition to the new manual. Stay tuned here for information as it becomes available!

We have had several questions from students about when they should plan to buy the 7th edition of the APA manual. We do not have a lot of details yet, but what we have heard from the Walden bookstore is that it will work much like other textbooks. You will likely acquire the seventh edition the same way you acquired the sixth edition, via the school’s bookstore. You will not need to do that until later next year, though, as the university has not yet set a date for moving to the seventh edition. We will keep you posted when we know more!

Walden faculty: APA has confirmed that it will provide complimentary desk copies to any faculty member who makes a request through their website. Contact APA7@mail.waldenu.edu for further information. [11/11/20 Note: This email address is no longer in use; please contact writingsupport@waldenu.edu for APA questions.]

Walden Writing Center staff members have all received copies of the seventh edition of the APA manual and are currently doing a close read to understand the changes that come with it. Throughout November, we’ll be assembling a document detailing these changes, which we’ll use to revise our own resources when needed and help the university establish a timeline for implementation. In the meantime, here’s a preview of a few rules that have been simplified in the new edition:

As a reminder, the sixth edition of the APA manual is still the only style guide in use at Walden, and we are only in the preliminary stages of preparing for a switch to the seventh edition. More information will be coming as dates for the switch are determined; continue to send any questions to APA7@mail.waldenu.edu. [11/11/20 Note: This email address is no longer in use; please contact writingsupport@waldenu.edu for APA questions.]

The APA Manual is releasing its 7th edition in October 2019. The Writing Center is working with faculty, course developers, and other stakeholders to ensure our transition to the guidelines in this new manual is smooth and thorough. Stay tuned to this page to stay up to date about the changes, timelines, and resources that will accompany this new edition. For questions or suggestions, please e-mail APA7@mail.waldenu.edu. [11/11/20 Note: This email address is no longer in use; please contact writingsupport@waldenu.edu for APA questions.]