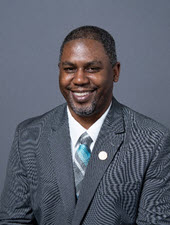 Ulysesses has over 11 years of experience in higher education. He has worked for Walden University since 2009 and has held several positions on the student facing side of the institution. Ulysesses joined the Walden Ambassadors Network in 2012 after completing his Master of Science degree and was an active member until he joined the Office of Alumni Engagement team as the Alumni Ambassador Manager in August of 2017.

Ulysesses manages a cohort of elite Walden Alumni who advocate for the university and one another by raising awareness of Walden as a leader of social change in their local communities, workplaces, professional associations, and social groups. Ulysesses enjoys working with prospective students, students, and alumni at all levels as they journey through the Walden University experience. The same shared commitment he solicited when he worked directed with students is the same shared commitment he’s excited about as a bridge builder between himself, the Walden Alumni Ambassadors and Walden University.